The Avengers is a 1998 American film adaptation of the British television series of the same name from the 1960s.

The film was directed by Jeremiah Chechik. It stars Ralph Fiennes and Uma Thurman as secret agents John Steed and Emma Peel, and Sean Connery as Sir August de Wynter, a mad scientist bent on controlling the world's weather and blackmailing various governments for sun or rain. Patrick Macnee, who played John Steed on the original series, makes a vocal cameo as the voice of Invisible Jones.

The film opens with John Steed (Ralph Fiennes), agent of The Ministry, in a training course, which he finishes successfully. Next, we see Dr. Emma Peel (Uma Thurman) at home, where she receives a phone call telling her to go to a gentlemen's club - no women allowed - where she meets Steed for the first time. The two head off to the Ministry to meet Mother (Jim Broadbent), who informs them that the Prospero project - an attempt to influence the weather - was sabotaged by... Emma Peel. Mrs. Peel claims she is innocent, but she is sent to work alongside Steed to find the real culprit. Mother's off-sider, Father (Fiona Shaw), claims Mrs. Peel suffers from a mental disease. They go off to visit Sir August De Wynter (Sean Connery), an old ally of The Ministry. He takes an instant liking to Mrs. Peel, as they both share a love of weather.

Steed and Emma follow a lead to Wonderland Weather - a business that artificially creates heat where there is cold and rain where it is hot with a special machine - where they discover two dead men in teddy bear suits. The members of a secret organisation—led by De Wynter—all wear teddy bear suits to disguise their identities. One of them, however, is a clone of Emma Peel. Steed arrives in time to save Mrs. Peel, as the double jumps off a roof, but disappears. Steed and Emma go off to visit De Wynter at his mansion - but are attacked by mechanical bees. They manage to flee, helped out by Alice (Eileen Atkins), a Ministry agent. Emma is captured by De Wynter, and tries to escape, but finds herself perplexed by the mansion's ever-changing floor plan. She smashes her way through a window, and Steed rescues her. Back at Steed's apartment, however, Mrs Peel is arrested by Father, as Steed visits Invisible Jones (Patrick MacNee), a man inside The Ministry, to investigate the meaning of a map Steed found at Wonderland Weather. Steed determines Father is working with De Wynter after viewing some photos of failed genetic experiments. Father and the Mrs. Peel clone (from here called Evil Peel) capture Mrs Peel, but are confronted by Mother, who is incapacitated. De Wynter - controlling Prospero and the weather - confronts the world's leaders, boasting that 'weather is not in God's hands, but in mine' and they will buy the weather from him, they will pay a lot for it, and they have got until midnight to pay up.

Father and Evil Peel take Emma to a hot air balloon, where Emma escapes during a snowstorm. Father and Evil Peel perish in an explosion. Invisible Jones determines De Wynter is using the Prospero instruments on a secret island. Emma and Steed arrive at the island. Emma defuses the Prospero device just as a hurricane forms over London. Steed duels De Wynter, and impales him. Emma and Steed escape just as the base self-destructs, and share champagne on the roof of a building with Mother.

Warner Bros., the film's distributor, refused to allow any early press-screenings for movie reviewers that most releases use to generate interest; such a decision is often made when a studio and/or distributor knows a film will not be received well and pre-release reviews would only be negative.[1][2][3] The film was originally scheduled to open earlier in the summer, June 1998, but was pushed back until August, often referred to as the late-summer "dumping ground" for films that are not felt to be strong or worthy enough to open on the more lucrative holiday weekends in early summer.[1] The film was a notable failure at the box office, grossing a weak $43 million over a budget of $60 million. Janet Maslin, of the New York Times, warned against poor editing and direction, explaining 'There's.......some business involving a dead ringer for Emma going around causing trouble, and there's some mention of the word ``cloning. Then all talk of that is dropped. Everything is dropped. After a slow opening, the 90-minute movie jolts into climax mode. What happened to the middle? Clearly, this wasn't just edited but gutted. No doubt they did us all a favor, but it doesn't help. Instead of just being a bad picture, the missing middle makes ``The Avengers a bad and weird and strangely off picture. One example: There's never a moment when Emma and Steed realize who the villain is. At first, they don't know. Next they're in a titanic battle to the death. At one point Emma is shackled and floating around in a hot-air balloon. I don't know how she got there. I must have blinked.'

The film was panned by critics. The review aggregator Rotten Tomatoes reported that 14% of critics gave the film positive reviews, based on 42 reviews.[4] Metacritic reported the film had an average score of 12 out of 100, based on 19 reviews.[5] The purists disliked it for its disrespect to the original series (particularly the introduction of a romance between Steed and Peel--a carefully ambiguous subject in the series), and the newcomers were lost by all of the misfired attempts to capture the mood of the original. Rod Dreher in the New York Post called the film "a big fat gob of maximum crapulosity, the kind of shallow, stupid, big-budget cowpile that smells of Joel Schumacher", referencing the previous summer's likewise poorly-received Batman & Robin, which also starred Uma Thurman. The Avengers was nominated for that year's Razzie Award for Worst Picture, Worst Director, Worst Screenplay, Worst Supporting Actor, Worst Supporting Actress, Worst Screen Couple, Worst Remake or Sequel, and Worst Original Song. Several critics, especially in the UK, noted that the American production team fatally misunderstood the symbols of 'Britishness' central to The Avengers series, such as the inclusion of an inexplicable gadget on the dashboard of Steed's Bentley which appeared to dispense tea, with milk already added.[6]

Further adding to the confusion, after test screenings, the 115-minute film was cut to 86 minutes, sacrificing much coherence and continuity in the process. The New York Times's Janet Maslin noted "At a pared-down, barely rational 90 minutes, "The Avengers" is short but not short enough."[2] 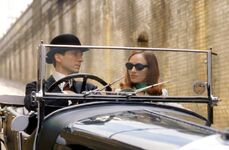 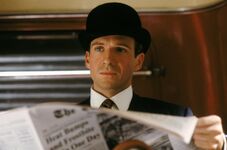 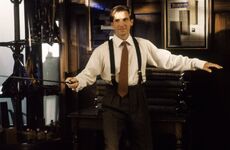 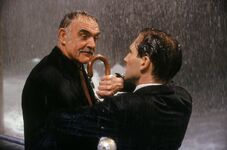 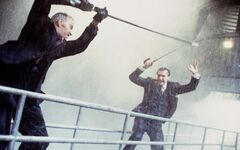 Add a photo to this gallery

Retrieved from "https://theavengers.fandom.com/wiki/The_Avengers_(film)?oldid=4607"
Community content is available under CC-BY-SA unless otherwise noted.